For our second artist spotlight at Master of Lore, it my pleasure to introduce Mr. Owen William Weber!  I recently wrote a feature article on Silver Lamp for which Mr. Weber has created a most compelling piece of artwork.  Not only did he graciously reply to my request for a high resolution original of his piece, but he took the time to share a wonderful glimpse into what it’s like to work on The Lord of Rings Card Game for FFG as well as more about his artistic passion, process, and projects.

Master of Lore (MoL):  When did you come onboard with Fantasy Flight and what projects have you been assigned to?

Owen William Weber (OWW):  I was first commissioned to do two Warhammer Invasion cards back in 2011 for Fantasy Flight.  They were the only pieces I have done for Warhammer, but I’m quite fond of them.  They were Purged By Flame and Boon of Tzeentch.  Since then I have mostly been used for Lord of the Rings and A Game of Thrones, but I have also done a card for a Star Wars deck.  I am best used for more down to earth images, scenes of everyday life with a fantasy feeling to them.

MoL:  How many Lord of the Rings pieces have you done so far and which one is your favorite?  Why?

OWW:  So far, three of my Lord of the Rings cards have been released, but I have two more on the way.  One should be released within the next month or so in “The Voice of Isengard” cycle.  My favorite piece that has been released is Silver Lamp, I was able to do some interesting lighting, and I feel the composition has a pretty nice flow to it, I hope fans like it as much as I do.

MoL:  What kind of directions do you get from the designers when you are commissioned for a piece?

OWW:  Usually it is an extremely straightforward process, the Art Director gives me a clearcut explanation of what they want the image to depict.  Most of the artistic license comes from the camera angles, color choices, maybe costume designs, etc.  Although, with Silver Lamp, it ended up being much different.  I started the project with the assignment being Haldir of Lórien, he was to be holding a lamp up to shed some light on the Fellowship, with whom he ends up bringing to Lothlórien.  So that was the image, Haldir holding a Light.  I guess they ended up liking my design enough to change the card to Silver Lamp and I think they gave the Haldir card to another artist.  I think the best part of the image is the Lamp so I’m fine with the change.  Also, the Art Director flipped the image horizontally to better fit the new direction they were taking with the card, which is not uncommon.

MoL:  Do you have a favorite character or scene from The Lord of Rings that you’d like illustrate?

OWW:  I personally like any character that has great hair, so I would love to paint Saruman, or Gandalf.  Any dwarf is a good commission.  I’d love to do Beorn, he’s my favorite character from The Hobbit.  I am of Norse heritage, and Beorn always felt like a Scandinavian character, and that’s probably how I would paint him.  If you go to my website, www.oweber.com, I paint trees quite often too, so I’d love to try out Treebeard or any type of Ent. 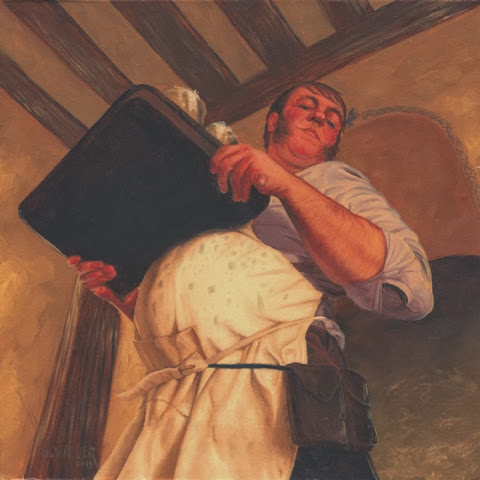 MoL:  Why did you originally want to become an fantasy artist?

OWW:  Fantasy books, movies, and art have always been a part of my life.  From early childhood, I have always been interested in otherworldly things.  I was obsessed with dinosaurs, Teenage Mutant Ninja Turtles, UFOs, Ghostbusters, horror movies, Tim Burton; all from a very young age, and I would draw them constantly.  When I got to college, I found like minded artists and professors, and I soon found that Fantasy Art is nothing to scoff at.  Some of the best artists in the world devote their time and energy to depicting Tolkien or other Sci-Fi/Fantasy authors.

MoL:  Are you working on any personal projects now that you’re excited about and would like to plug?

OWW:  I am always working on personal work between commissions.  I am currently pursuing a series of paintings incorporating dinosaurs and people; which are meant as statements against Creationism.  I have recently been informed that the first piece in that series, “Beliefs Mean Nothing”, is a Finalist in the Art Renewal Center’s Annual Salon.  Also, I am involved in “Lands and Legends” through Michael Publishing.  I will also be featured in the 2nd Annual Infected By Art book.  Please look my art page up on Facebook for any new info that may pop up.

OWW:  Just that I truly love the worlds that I help illustrate, and I hope you all enjoy my work.  I will be at GenCon Indy this year, so if anyone is in the Indianapolis area in August, look me up in the Art Show, I’d love to talk with any fans of the game!

MoL:  Thank you for your time and contributions to Professor Tolkien’s world and our favorite card game!  Best wishes in the ARC Salon and all your future works.  I hope LOTR LCG fans get a chance to meet you at GenCon and we hope to see your art gracing many more cards in our upcoming adventures!

← Silver Lamp
Special Feature: The Others →