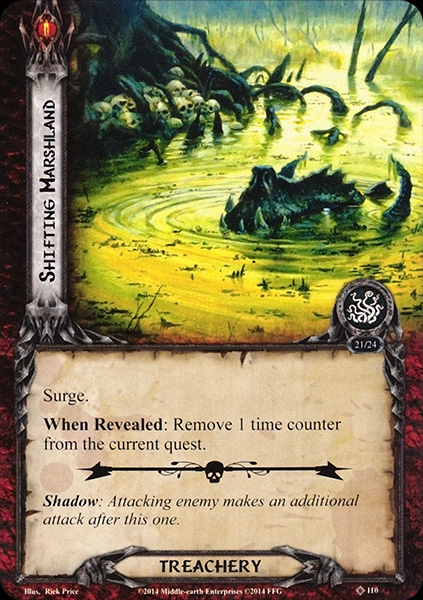 Tolkien scholarship can often be just as shifty!

As our heroes flee their “Trouble in Tharbad” and head deeper into the land of Eregion, we also venture as deep as we have ever been into the obscure lore of Professor Tolkien’s world. Although the chief enemy of “The Nîn-in-Eilph” adventure pack is an Ancient Marsh-dweller, in fact, the swampy arena of our boss battle was actually one of the latest developments of all in the history of Middle-earth. Our dedicated designers have truly outdone themselves this time, fleshing an entire scenario out of the details of a letter Tolkien wrote in response to fan mail some 14 years after The Lord of the Rings and first published for all to read in 2001. Pull on your bog boots, we’re wading into the Shifting Marshland of Tolkien scholarship!

No narrative or any action whatsoever takes place in the Nîn-in-Eilph in Tolkien’s published works. The name is not even mentioned. The lone allusion to the area comes in Chapter 6 of Book VI in The Return of the King, as many of the heroes are travelling home by way of the Old South Road after Aragorn’s coronation. Here we are told that they pass into “northern Dunland, where no men now dwelt” and that sometime in September 3019, they reach “the Swanfleet river” (see map below). There they cross by “the old ford, east of the falls” and we are given a brief description of the Impassable Marshland through which our heroes must escort the impossible Dwarf Nalir:

Far to the west in a haze lay the meres and eyots through which [the Swanfleet] wound its way to the Greyflood: there countless swans housed in a land of reeds.

From The Atlas of Middle-earth by Karen Wynn Fonstad (1991)

It is at this site in Dunland, far east of our swamp, that the hobbits and the Wise camp and take rest together for a week. Gandalf, Elrond, Galadriel, and Celeborn debrief everything that has transpired before making their final parting. I think that this scene deserves to be quoted in full, despite not relating to our adventure, because it is so rich and poignant (and serves as the textual basis for Gandalf and Galadriel’s telepathic communication in Peter Jackson’s films):

Often long after the hobbits were wrapped in sleep [the Wise] would sit together under the stars, recalling the ages that were gone and all their joys and labours in the world, or holding council, concerning days to come. If any wanderer chanced to pass, little would he have seen or heard, and it would have seemed to him only that he saw grey figures, carved in stone, memorials of forgotten things now lost in unpeopled lands. For they did not move or speak with mouth, looking from mind to mind; and only their shining eyes stirred and kindled as their thoughts went to and fro.

Isn’t that just gorgeous? But it seems that at least one fan wasn’t so swept up by Tolkien’s prose that he could ignore the perplexing reference to “the Swanfleet river”. It wasn’t mentioned anywhere else in the book and it wasn’t on the map. In 1969, this fan (a college student named Paul Bibire) wrote to Tolkien telling him about his philosophy class and asking about the Swanfleet river. In response, Tolkien urged Paul to check out his new “map with corrections” to be published in “the India paper edition” before going on to explain a bit more about the history of Dunland saying this specifically about the river:

But in the days of The Lord of the Rings the region had long become ruinous and lapsed into its primitive state: a slow wide river running through a network of swamps, pools and eyots: the haunt of hosts of swans and other water-birds.

It is in this letter that Tolkien first gives the name Nîn-in-Eilph, which is Sindarin meaning “water-lands of the Swans”, saying that if he could revise the map again he would use it to “mark the lower part as fenlands” in order to explain the Swanfleet river to future readers. 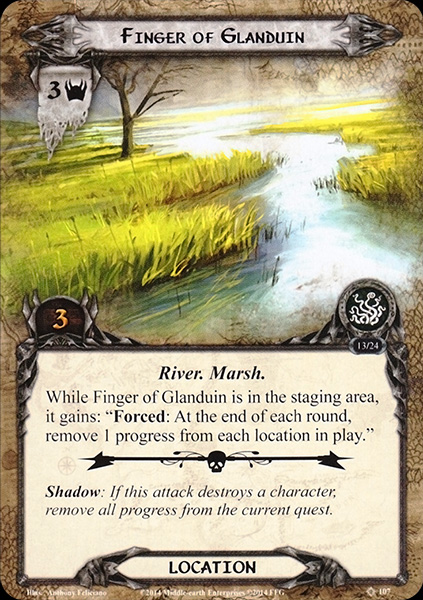 He also clarifies that the Glanduin, whose finger has been picking at our heroes’ location progress, is actually the same river as the Swanfleet though the two names mean different things. Glanduin means “border-river” and it comes from days of Arnor and Gondor in the Second Age before the Northern Kingdom fell. Thoroughly confused yet? There is no longer any need. Although Tolkien never got around to updating the map in his lifetime, his son Christopher finally did so in 1980 and so a quarter century after The Lord of the Rings was published, the Swanfleet was officially identified and our swan-infested swamp got its funky name — the Nîn-in-Eilph!

Paul Bibire, the student who had first written to Tolkien, went on to become an author and lecturer of Anglo Saxon and Old Norse at the University of St. Andrews. He remained a Tolkien enthusiast his whole life, crediting the Professor as the motivation for his academic career. Can we get a hero card of that guy?

Map of Middle-earth by Christopher Tolkien (1980)

The record of Tolkien’s interaction with Paul and willingness to revise and update his work to answer all his fans’ questions is not unique for him. It was the Professor’s modus operandi. He enjoyed trying to address every little point “which attentive readers have raised”, no matter how obscure. In doing so, Tolkien fleshed out his world and left a phenomenal paper trail for us to enjoy. Sure, sorting through the myriad editions, essays, notes, and letters to trace the development of Middle-earth might sound like a bit of A Weary Passage with No End in Sight. But fans of the “Nîn-in-Eilph” might find that kind of back and forth quest quite enjoyable. I know that I’ve been loving it!

Sometimes trying to sort out Tolkien’s texts can feel like this!

It seems that our FFG designers enjoy it as well, going so far as to include the Finger of Glanduin as a location in our scenario despite its name only appearing in the tertiary sources and never in The Lord of the Rings. Even the generic swamplands include Tolkien’s unique words “eyot” and “fen” in the title, showing their keen attention to the incidental text.

But now it’s my turn to ask a fan question to the creators of our game. In Unfinished Tales, Tolkien makes a reference to the swamp saying that the “host of swans” and “other water-birds” are “the only inhabitants” (emphasis mine). If that is so, where did the idea of this Ancient Marsh-dweller come from? Didn’t you think that the textually accurate creature below would be a satisfying boss enemy for us? Thanks for another great quest!

That toothy tongue and beak are at least as scary as the Ancient Marsh-dweller’s, no?