Following on the heels of Derek’s excellent article on the geography of The Lost Realm, Fantasy Flight has revealed the second major location where our adventures will be set in the Angmar Awakened cycle — the fabled Mount Gram of the legends of the Shire. In the “Escape from Mount Gram”, our heroes will be leading a ‘daring and dramatic prison break’ from this goblin stronghold in the North.

Like so many of the details in the lore of the North, the precise location of Mount Gram is unknown. In fact, the site is only mentioned once anywhere in Tolkien’s legendarium — in the first chapter of The Hobbit, “An Unexpected Party”. While introducing the quest for Erebor, Thorin mentions that some of the Company ‘may never return’, sending the poor domesticated Bilbo Baggins to his knees ‘on the hearth-rug, shaking like a jelly that was melting’ and repeatedly shrieking ‘struck by lightning’. In an effort to reassure the Dwarves of his chosen burglar’s potential, Gandalf promises that the ‘excitable little fellow’ will rise to the occasion and be ‘as fierce as a dragon in a pinch’. The following narrator’s aside gives us our lone reference to Mount Gram:

If you have ever seen a dragon in a pinch, you will realize that this was only poetical exaggeration applied to any hobbit, even to Old Took’s great-grand-uncle Bullroarer, who was so huge (for a hobbit) that he could ride a horse. He charged the ranks of the goblins of Mount Gram in the Battle of Green Fields, and knocked their king Golfimbul’s head clean off with a wooden club. It sailed a hundred yards through the air and went down a rabbit-hole, and in this way the battle was won and the game of Golf invented at the same moment.

Tolkien never put Mount Gram on a map, so Karen Wynn Fonstad’s work is purely a guess. Much is lost in the lore of the North.

According to the “Tale of Years” in Appendix B, this battle took place in the Northfarthing in 2747 of the Third Age, over 250 years before the timeline of our card game. But, as Galadriel says to the Fellowship in Lothlórien, the course of history has been a ‘long defeat’ in Tolkien’s world. Wars are never totally won, and the Shadow will always grow again. Our game designers have picked up on this theme in their spoiler article for the “Escape from Mount Gram” saying:

No story is ever truly ended while its actors live on, and though the Goblins were routed [in the Battle of Green Fields], many retreated to their home at Mount Gram. There, they passed the centuries hidden from the Hobbits and the Rangers of the North. They launched no more invasions of Eriador, but they never shed their evil natures…

Despite this ominous theme, however, Tolkien was no pessimist. Instead, the ever-present Hope that pervades his work is that in every age unlikely heroes will join with the inheritors of prophecy to keep the darkness at bay.

From the spoiled card fan, it appears that FFG has created a goblin character named Gornákh to represent this emergent darkness as the chieftain or prison warden of the grim goblins of Mount Gram. The name is an allusion to Tolkien’s orc Grishnákh who led the forces of Mordor accompanying the Uruk-hai that captured Merry and Pippin in The Lord of the Rings. The cards for the Goblin Tormentor and Cruel Torturer seem to have received art direction based on the Professor’s portrayal of Grishnákh as ‘a short crook-legged creature, very broad and with long arms that hung almost to the ground’. 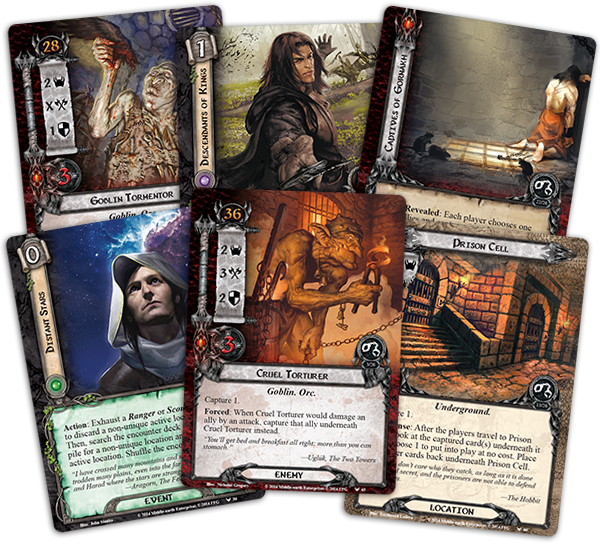 Once again, it looks like our game designers are doing a wonderful job ‘filling in the corners’ of Tolkien’s tale with careful and reverent attention to his lore and greater themes. That said, we have no word yet on whether we will get a Rabbit-hole location or Hobbit Golf side quest as we escape from Mount Gram in the upcoming adventure!