Last November, the most anticipated adventure pack of The Ring-maker cycle hit the game with meta-changing might, introducing the last major character from the novels yet to receive hero treatment —  the Lady Galadriel. I can barely think of the scenario without hearing Cardboard of the Rings host Brandon’s conspiratorial whisper. “Celebrimbor’s Secret!” But what exactly is Celebrimbor’s “secret”? What did the consummate craftsman of the Second Age have to hide? Let’s see if a Hasty Stroke from the Master of Lore can shed some light on this shadowy subject!

In our quest, Celebrimbor’s secret is the mould he used to forge the Rings of Power. Yet in their design notes on the cycle, the creators of “Celebrimbor’s Secret” concede that it is ‘unlikely’ that the forge would have survived the fall of Hollin or that Sauron would have forgotten its location had it remained. In order to establish their narrative, however, they imagine that the skilled Elven smith was able to ‘shield the forge’s location from Sauron’s mind’, keeping it secret and safe until our heroes and the unsavory Bellach scour the ruins of Ost-in-Edhil for it during the time frame of our game. It’s an awesome quest but we might imagine that Celebrimbor has something else to hide. 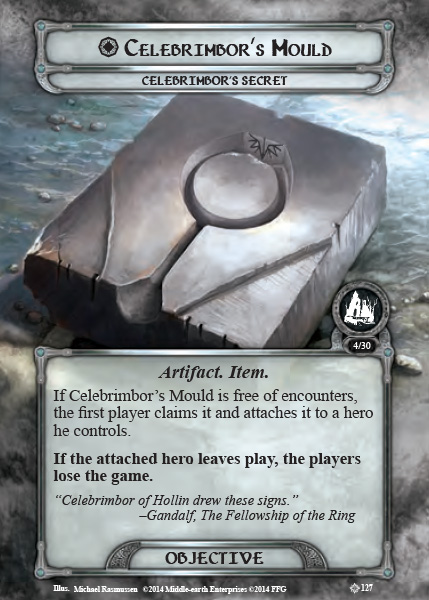 Really Celebrimbor? This is your secret?

Indeed, a careful reading of some of Tolkien’s more obscure works reveals another secret that Celebrimbor guarded closely and it is related to the beguiling Noldor hero included in this pack. Like Galadriel, Celebrimbor was a character that Tolkien created when he was writing The Lord of the Rings. Whereas other First Age characters such as Morgoth, Fëanor, Beren and Lúthien were conceived long before being mentioned in LOTR, others such as Galadriel and Celebrimbor were new creations, not drawn from the earlier work. As such, a major part of the Professor’s unfinished revision of The Silmarillion was writing these new characters back into the ancient legends, fleshing out their role in his earlier saga.

What if they’d been finished?

While The Silmarillion published by Christopher Tolkien could not reflect the completion of this work, the experimental essays and notes in the “History of Galadriel and Celeborn” of Unfinished Tales reveal tantalizing glimpses of how the story might have gone. The question of “canon” when it comes to these writings is a confusing issue among Tolkien fans depending on whether you take Tolkien’s earliest writings, latest writings, or Christopher’s publication as the definitive version. Either way, it is fascinating reading which suggests a secret that makes Galadriel an even more thematic inclusion in this AP than anyone might have first suspected — an unrequited romance.

In one of the histories of “The Elessar”, Galadriel confides to Celebrimbor that she is ‘grieved in Middle-earth, for leaves fall and flowers fade that I have loved’. In response, Celebrimbor dares to share his own confidence, a secret which appears in no other text. When Galadriel asks if ‘Middle-earth must fade and perish for ever’, the Elvish craftsman replies:

That is its fate, I deem. But you know that I love you (though you turned to Celeborn of the Trees) and for that love I will do what I can, if haply by my art your grief can be lessened.

Yes, it appears that the ‘maker of the Three’ was not only duped by Sauron, but also rejected by Galadriel who, in a classic Tolkien turn, was more enchanted by an insipid tree-hugger than a master of arts and crafts. 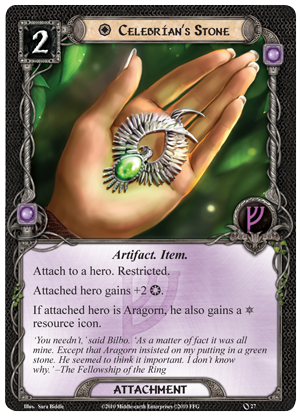 Celebrimbor’s love of Galadriel has ‘no trace elsewhere’, so it must have been a deeply kept secret, but he did follow through on his confession. Keeping the promise to ‘do what I can’ to relieve his beloved’s grief, Celebrimbor ‘began a long and delicate labour and so for Galadriel made the greatest of his works (save the Three Rings only).’ It was a ‘green gem’ of unrivaled subtlety and clarity, set ‘within a great brooch of sliver in the likeness of an eagle rising upon outspread wings.’ As LOTR LCG players, we are familiar with this artifact as Celebrían’s Stone. It is the Elessar, or Elfstone, which Galadriel gives to Aragorn in Fellowship of the Ring. When Galadriel received it, ‘all things grew fair’ about her, except of course, her affections for Celebrimbor.

As I said before though, this is merely a fragment of one version of the history. In another unfinished essay, Celebrimbor at one point leads an armed revolt against Galadriel’s rule of Eregion suggesting he felt anything but love for her. Then again, the line between love and hate can sometimes be quite thin (as I know when playing a particularly challenging quest in our game!) so perhaps both stories are true, or neither. Only Tolkien himself could have determined for certain all of Celebrimbor’s secrets, but the Professor passed away before ever publishing a definitive version.

As a result, we can believe what we want about Celebrimbor’s history, but I will suggest this. Next time you play “Celebrimbor’s Secret” with Galadriel, give her Celebrían’s Stone to boost the willpower she can lend via Nenya, her Ring of Power from Celebrimbor. Then imagine a shade of memory and musing falling over the Lady of the Wood as Celebrimbor’s Mould is attached to her. What ‘things that were’ does she see in the Mirror of Galadriel? And did Celeborn ever know the secret?