Although Peter Jackson’s The Hobbit film is currently winding down its theater run, his mega-budget fantasy action trilogy is bound to keep all things Tolkien blooming before us for the foreseeable future.  From books to bobbleheads, video games to glassware, and costumes to collectibles like the living card game this blog will discuss, there is no doubt that Middle Earth Enterprises is making the most of every marketing opportunity availed to them by the popularity of Professor Tolkien’s classic work.  Recently, there are even talks that a possible theme park is looming on the horizon!

For longtime fans of Middle Earth, this commercialized surge of hobbity products is met with a mixture of fascination and fear.  On one hand, it is delightful to see so many people enjoying the beloved tales they’ve held dear for decades.  On the other hand, the richness and sophistication of Tolkien’s work is so much deeper than what can be translated to screen and perhaps even antithetical to the materialistic trappings of Hollywood blockbuster culture.

Certainly this latter sentiment is the stance taken by Christopher Tolkien, son of the esteemed author and executor of the Tolkien Estate.  Currently suing the rightsholders for $80 million for breach of contract over the creation of digital products like the egregious “Lord of the Rings: Online Slot Game”, Mr. Tolkien spoke out about Jackson’s films and the commensurate merchandising in July 2012 saying that they have “gutted the book” and become “absorbed by absurdity”.  Promising to never see The Hobbit films, he concluded that “the gap widened between the beauty, the seriousness of the work, and what it has become is beyond me. This level of marketing reduces to nothing the aesthetic and philosophical significance of this work.”

While I am reluctant to criticize an elderly man who has admirably devoted his entire life to bringing his father’s literary work to light, I must say however that I completely disagree with this statement.  Without a doubt, a mousepad of Gondor does not convey the majesty of Tolkien’s legendarium, but I would rather argue that such a dedicated advertising campaign has brought many people to explore more deeply the grander mythology of Middle Earth and, on the whole, that has been remarkably positive.

I am among that crowd and this blog is dedicated to a quest of narrowing the gap and examining the “aesthetic and philosophical significance” that underlies Tolkien’s tales by commenting on one of the licensed vehicles through which his story is reaching a wider audience – The Lord of the Rings Living Card Game from Fantasy Flight Games.

From my perspective, Fantasy Flight has done a remarkable job respecting the literary themes of The Lord of the Rings, an argument thoughtfully advanced in this post on the “Tales from the Cards” blog.  Indeed, according to a poll on the “Hall of Beorn” blog, the majority of the game’s players enjoy it most because of its thematic potentiality.  This appreciation of the story is clearly embedded in the craftsmanship of the cards as the box proudly advertises that the game is “based on the novels of J.R.R. Tolkien” and an initial article for the next adventure pack states as a design goal to “immerse the players in the narrative”.  Further proof that the designers have succeeded in bringing Tolkien’s themes to life for a new generation of fans is found in the conversation of the prolific podcasters from “Cardboard of the Rings” whose excellent card and strategy discussions turn to their personal engagement with the meaning of the text in Episode 38 “The Mirror of Galadriel”.  In short, everyone who plays this game cannot help but be drawn into the epic tale that it is based upon.

This blog is purposed to enhance the thematic and narrative aspect of the game for these players as well as introduce the game to fans of Middle Earth who, like Christopher Tolkien, may be disturbed by the array of products available but are interested in learning about one that I believe is getting it right.  One of the testaments to the success of J.R.R. Tolkien in his professed goal of creating myth is that his story lives, continues to grow, and inspires.  In that spirit, each post of this blog will feature a card from the Lord of the Rings LCG as an embarkation point for journeying deeper into the Tolkien legendarium with these three goals:

I am amazed with every scenario and adventure pack at the level of care that the designers are giving to mining Tolkien’s text for references and inspiration.  I never play the LOTR LCG without a copy of The Complete Tolkien Companion by J.E.A. Tyler by my side and find myself regularly discovering new entries that flesh out the environment and flavor the experience.  The first part of each post will explore the legend behind select characters, locations, and artifacts that allude to the source material.

Although I’ve titled my blog “Master of Lore”, I must confess that although I’ve known the story of The Hobbit since childhood, and The Lord of the Rings since college, it is only in recent years that I’ve come to truly appreciate The Silmarillion and I still have have not read any of Unfinished Tales or The History of Middle Earth.  Perhaps “Apprentice of Lore” would be a more accurate title then, as I want to learn more.  Currently I’m listening to the excellent “Silmarillion Seminar” podcast by “The Tolkien Professor” Corey Olson as well as The Children of Hurin audiobook read by the venerable Christopher Lee.  By exploring the legend through these cards, we will aspire together to become “masters of lore”.

Regardless of what else one might say about the LOTR LCG, it must be acknowledged that the artwork is gorgeous.  These efforts were formally acknowledged as Fantasy Flight Games won the Dice Tower Award for “Best Game Artwork” in 2011.  Shuffling through the cards of a new adventure pack is always a visual treat that definitely enhances the aesthetic of Tolkien’s world.

As part of each post, I will either scan or locate a high resolution version of the artwork on the featured card and provide a link to the artist’s other work when possible.  For starters, check out this fantastic visioning of Boromir, the latest hero in the Heirs of Numenor series.  This piece was created by Magali Villeneuve and more of her artwork for Lord of the Rings can be found on her blog.

The illustrators commissioned by Fantasy Flight are only the latest in a long line of artists, professional and amateur, that have brought their skills to bear on Tolkien’s world.  In the second section of each post, I will find other renderings of the featured entry.  Some of these may come from more familiar sources like Peter Jackson’s films or famous Tolkien artists such as John Howe, Ted Nasmith, and Alan Lee.  Others will come from the many online art hosting sites such as DeviantArt which house an impressive collection of original images.

For example the piece that I chose for my original header is an oil painting from Justin McHenry that I found on DeviantArt.  I was searching for a piece that captured the feeling of being transported to fantastic realms through stories around the fireplace.  The evocative image of great tales being told around the fire is a recurring motif in Tolkien’s work.  From Bilbo’s fireplace in Bag End to Elrond’s Hall of Fire in Rivendell, the association that storytelling creates between a warm hearth and warmth of heart is the real magic of J.R.R. Tolkien.

Through exploring the legend and showcasing artwork, hopefully we will catch a glimpse of what Christopher Tolkien fears we are missing when he recalls that “at night, [my father] came into my room and told me, standing by the fireplace, great stories, that of Beren and Luthien for example. All that seemed interesting was from his way of looking at things.”  Mr. McHenry’s art has been selected to awaken that spirit! 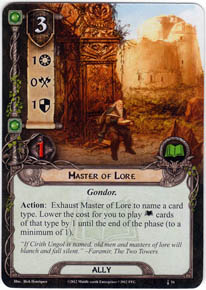 The cyclical nature of the hero’s journey is another central theme of Tolkien’s work.  The hobbit’s tale is titled There and Back Again and so after taking the card game as our home for departure into the lore of Tolkien, we will return back to where we began with new understanding.  Just as Gandalf counsels Bilbo in The Hobbit film, we’ll be able to play the game again with “a tale or two to tell” that will make the experience “never be the same”.

In the third and final section of each post, I will review cards according to how their stats and abilities resonate with the lore that inspired their names.  I expect we will find some cards that are a wonderful match to the characters, locations, and artifacts they are meant to represent while others may leave more to be desired.  Finally, I will consider ways to include the featured cards into decks and scenarios that would be particularly thematic given what we’ve learned about their backstory.

It is at this point that I hope we will generate a interesting discussion as readers post their own card reviews, uses, and strategies!

As you can tell from the links in the post, there is an impressive online community around Tolkien’s work and The Lord of the Rings LCG.  Hopefully this blog will readily integrate into this network and provide us all with a greater appreciation of the beauty of Professor Tolkien’s work.  “I’m looking for someone to share in an adventure.”  Shall we?